Jayrah Gibson was born and raised in Long Beach, California, by his mother Singer/Songwriter/Actress and former Motown artist Kitra Williams. He began his journey as a young star on the rise while his mother held him in her arms, as she recorded for long hours in the studio and on set. Jayrah has been singing since he was able to talk and writing songs from the age of 6. During that time, Jayrah's biggest musical influence was his mother, watching her grace stages across the globe. As he grew older he drew inspiration from such artists as Stevie Wonder, Brian McKnight, The Dream, Usher and Musiq Soulchild, just to name a few.

Jayrah's music has been described as a breath of fresh air to the R&B/Pop & Hip hop culture . He has been winning over audiences with his magnetic personality, unique, progressive sound and has definitely made his mark in the entertainment industry. His star stunning performance landed him the opportunity to appear on American idol and while climbing his way to the top , he touched the hearts of many people, far and wide. Since then he as collaborated with various A-list artists, songwriters & producers such as, Eric Bellinger, Usher, The Stereotypes, No-ID, Wiz kid, TY Dolla $ign, Scott Storch, Steve Franks, Tommy Brown, Mila-j, and countless other top ten Billboard and Grammy winning artists/ song writers and producers .
Jayrah has managed to change history around the world by creating a lane through K-Pop and is a proud owner of over a billion streams worldwide; coming from Long Beach that is no easy feat. He has penned and produced multiple #1 peaking records and broke numerous records worldwide with streams and sales with hit singles like , EXO “Growl”, which became one of the longest charting and most sold singles in all of Asian the last 12 years , EXO-CBX “Hey Mama and EXO “Love Me Right” just to name a few. 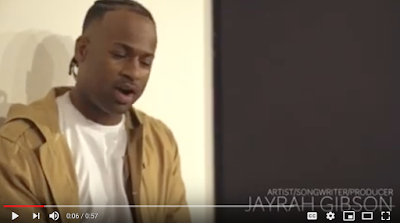 These records have sold and streamed millions and changed not only the U.S perspective on K-Pop but the worlds . Jayrah continues to pave the way to bridging the gap between America and various other parts of the world.
With all the success and time he has put in to developing and creating a unique sound for other artists, Jayrah is excited to have established a lane of his own and is ready to blaze stages across the world with his talents . His ability to conquer multiple genres, has allowed him to create a diverse sound and alter ego for himself; Jayrah Gibson, who represents R&B and “Rah” who represents Hip-Hop.

Jayrah’s desire is to inspire others with his testimony and promote no boundaries when it comes to expressing oneself musically; His belief is “Good Music, Is Good music”. With his endless melody’s and intricate and innovative rhyme patterns , Jayrah continues to find new and fresh ways to cultivate abilities. With his determination to succeed, humbleness, and willingness to learn displays that he is someone to keep an eye on as the future of R&B and Hip-Hop.
LIVE FOOTAGE!!
FOLLOW
Twitter
@jayrahgibson
FB
JAYRAH GIBSON
Instagram
jayrahgibson